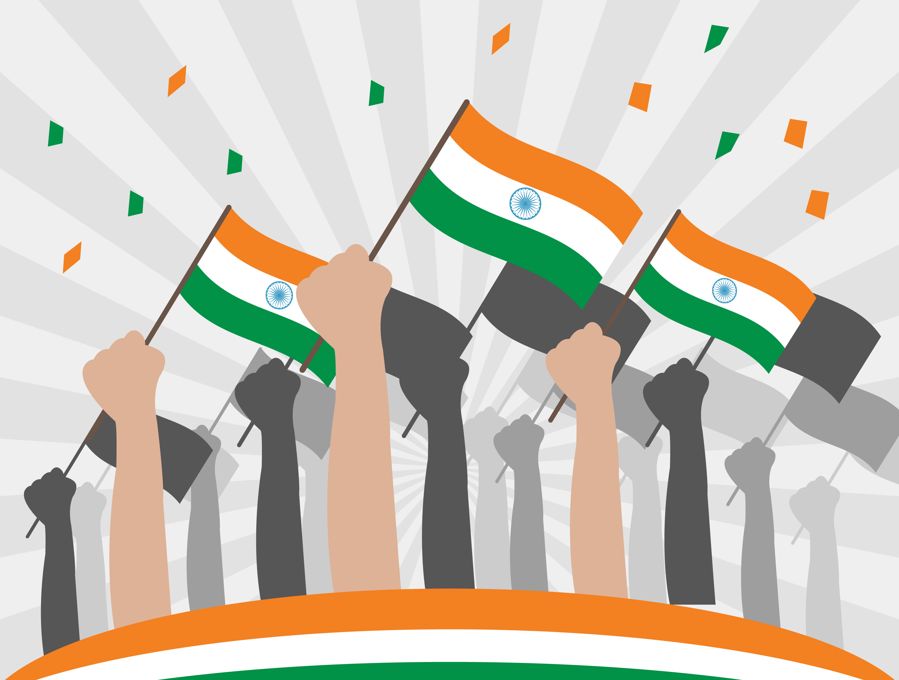 Indian independence turned 75 today. Azadi Ka Amrit Mahotsav, the year-long celebrations for the Diamond Jubilee, got started early. It does not imply that the nation’s issues are entirely resolved. While some long-standing issues have been remedied, others still exist. In addition, there are more recent issues. The cycle never ends. Despite all the issues, gladness is the most natural reaction when celebrating the Amrit Mahotsav.

On August 15, 1947, we got the power to establish a government of our choice and other systems. The struggle for Independence, waged by Indians against the foreign rule, was countrywide. People of all sections of society were part of it. The armed struggle, non-violent methods of agitation and social awareness programmes ran concurrently to achieve Independence.

As the country celebrates the Diamond Jubilee, there is all-round enthusiasm. We should remember our heroes who got us Independence with their hard work and sacrifices. It is necessary to enlighten society about those who had bravely laid down their lives with a smile on their faces. We should remember their supreme sacrifice.

We should remember our duties towards the nation and dedicate ourselves to fulfill them. One of the motivating factors for achieving Independence is self-expression.

Those who sensitised people and fought for the country’s Independence through violent and non-violent methods also prepared people on how to safeguard the freedom. They explained this objective in more ways than one. Gurudev Rabindranath Tagore, in a poem penned by him, titled ‘Chitt jedhaa bhayshoonya unnat jatho shir’ explained the ingredients needed to achieve Independence. Freedom-fighter Veer Savarkar, in his poem titled ‘Swantantrata Devi Aarti’ said that when the country becomes independent, it will emerge as an exemplary, best and lofty country.

Mahatma Gandhi, in his work ‘The Hind Swaraj’ described how independent India will shape up. Dr Babasaheb Ambedkar, in his two lectures delivered while piloting the Constitution in Parliament, explained the objective of the country becoming independent and the duty that we should perform to achieve the objective.If the purpose of freedom is the manifestation of ‘self’, we have to think about what ‘self’ actually is. In the context of global living, what capabilities India should acquire to enable it to play its role? What is our duty to accomplish this? How we should prepare society to fulfill the duty?

The country has given message to world at large through its sanatana dharma, perspective and culture. They are characterized by holistic concepts based on empirical and scientific truths.

To remain united, all people need not become similar. Making everyone the same, separating them from their roots would create conflict. A cohesive society is created when everyone forges ahead preserving their uniqueness and recognising the uniqueness of others.

Being sons of the soil, the umbilical cord that is uniting one and all is our patriotism. Ideals of valiant and virtuous ancestors are guiding us. By treading the path shown by our elders, setting aside our differences, we should work for the good of the country. The need of the hour is to prepare society to achieve the goal.

Evil and selfish thoughts that creep into our mind due to factors such nationality, caste, language, geographical differences and our lust for name and riches should be wiped out completely. We can safeguard our Independence by evolving an egalitarian society that is free from exploitation.

Vested interests are active hatching a conspiracy both inside and outside the country to create misunderstandings, trigger unrest, and foment trouble in society to fulfill their selfish goals.  A united and capable society gives no scope to such forces.

People of a democratic and independent country elect their representatives. In a democratic system, people should be prudent to achieve comprehensive development of the country. They should understand the ideologies of various political outfits, law of the land, statutes, and duties of subjects as it is essential to fulfil those duties.

To move forward on the basis of a clear understanding of what ‘self’ is, knowledge about ‘self’, pure patriotism, a sense of personal and social passion as well as unity are essential. Only then physical knowledge, capabilities and administrative machinery will come in handy.

On the occasion of the Amrut Mahotsav, industry of our ancestors to achieve Independence should be remembered. An administrative system that is conducive to self-rule should be built to take the country to a glorious phase in all fields of activity. “Come; let us march ahead with more alacrity and with enthusiasm on the path (tapomargam)”. #tohyd #hydnews