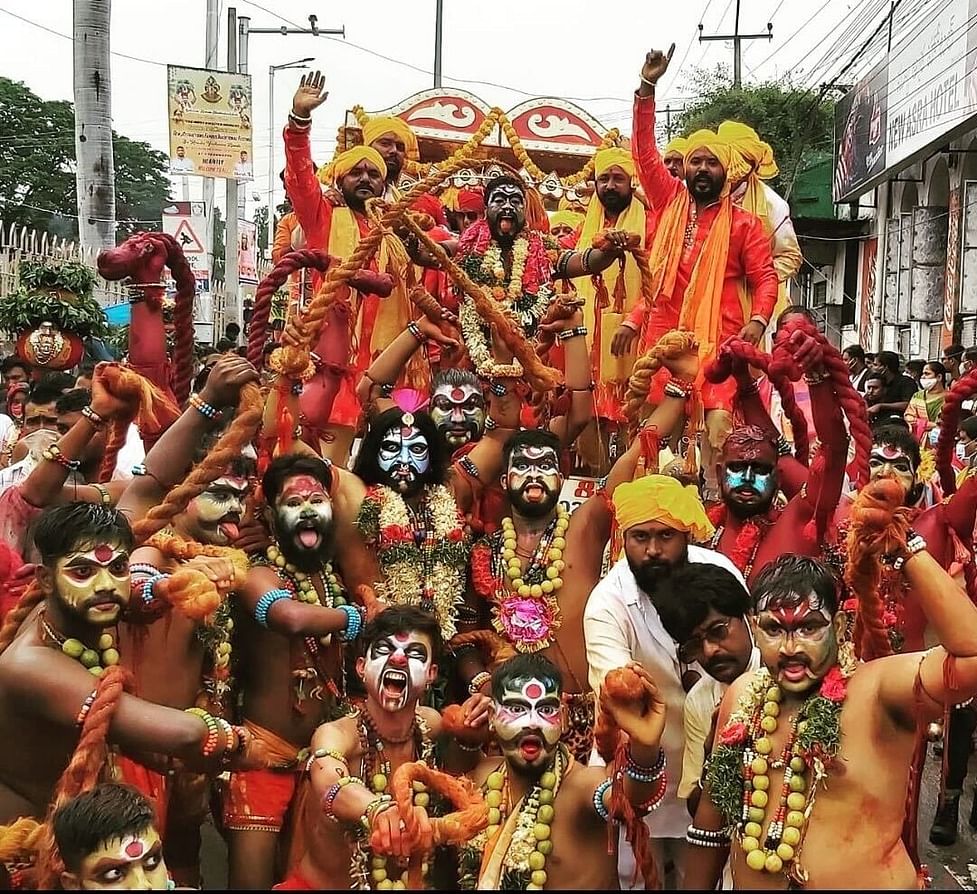 Telangana’s traditional monsoon festival is attracting young men who want to channel their inner ‘Potharajus’ with terrifying avatars. For the seniors, it’s still a family legacy. 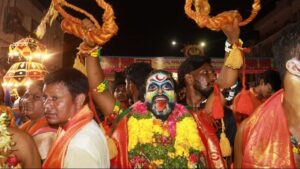 Clad in a pair of tight shorts, 31-year-old Talwar Shiva carefully covers his torso with turmeric and vermillion, paints his face a vivid red, lines his eyes with kohl, puts on heavy anklets and stuffs his cheeks with lemons. At the very end, he picks up a pair of heavy ropes —all the better to whip people— and sticks his tongue out. Like his grandfather before him, he has become Potharaju, the fearsome brother of the goddess Mahankali and the key figure in Telangana’s traditional monsoon festival, Bonalu.

Potharajus, mostly men, lead the processions to the temple during the festival in a violent dance as they ward off negative energy. Though Bonalu dates back to the 19th century, it is increasingly attracting young men in droves. And it is not just devotion that is driving this trend. As tradition and modernity converge, unemployment, the need for recognition from society, social media frenzy, and for some a chance to show-off their gym body are fuelling the desire among youth to channel their inner Potharajus. The more terrifying the avatar, the better.

“Young boys who work out in the gym come up to me saying they want to become a Potharaju because they have an attractive body!” says Shiva in outrage.

He has been playing the role of Potharaju for the last 16 years and though he is only 31, he is considered one of the seniors in the industry. Today, he trains as many as 70 young men, a majority of whom are barely 20 years old. “Over the last three years, we’ve seen an increase in young people joining us,” he says, showing a WhatsApp group of 500 Potharajus, created by one of the young members. The trend coincided with the pandemic, an irony that is not lost on those aware of the legends associated with the festival, which is celebrated to thank the goddess for keeping the plague away.

It’s different for the young

Shiva chose this line of work because it was a family legacy that he vowed to continue.

As a child, he was in awe of his grandfather, who was a Potharaju in the 1970s. “Even people from other religions used to come to watch my grandfather perform–such was his vigour and pomp. I was so mesmerised by him as a kid that I decided I would become a Potharaju one day. After I donned the avatar for the first time, I spent almost a year researching who a Potharaju is, what is his significance, how he should behave and what are his duties,” Shiva told #KhabarLive.

But a majority of the youth today who are enamoured by the sheer aggressive display of the avatar don’t care about the tradition or significance. “Young boys come up to me saying they want to become a Potharaju because they want their financial needs to be fulfilled. They want to gain traction on social media, they want to become famous in the community or the streets. Half of them don’t even understand the significance,” says a disgruntled Shiva.

For instance, the vermillion and turmeric powder used by the Potharaju are not something picked up from the store. There are special rituals— ‘mantras,’ ‘pujas’ before a Potharaju puts them on their body. The ropes — made of banyan tree stems — undergo a similar ritual and are soaked in milk for days, says Shiva.

Increasingly though, younger Potharajus are experimenting with different looks with the help of make-up. The aim is to create the fiercest, most terrifying avatar. According to Shiva, there are 50 old Potharajus, who use only turmeric and vermillion compared with the 800 young Potharajus who use make-up.

More than a decade ago, Shiva used to paint his face with wall paint, which damaged his skin. “This generation wants to look good, it has become like a competition on who can come up with that aggressive look and hence they prefer professional make-up artists. It’s no longer just about vermillion and turmeric.”

Potharajus can earn anywhere from Rs 10,000 to Rs 50,000 a day depending on their age, experience and popularity. They are hired by temple managements, families maintaining any temple, and local people who wish to celebrate the festival. For instance, if a family wants to go to the temple with a procession, they would request a Potharaju to accompany them as part of the celebration in return for a payment.

Twenty-six year old Sagar is one of Shiva’s ‘disciples’ and became a Potharaju last year to increase his family income. His father lost his job during the pandemic and Sagar was struggling to make ends meet. So, he became a Potharaju for a month and earned Rs 50,000.

Shiva, however, often turns away ‘clients’ who want to play the role of the avatar for purely financial reasons. “There are students who come to me saying they want to pay off their college fees by becoming a Potharaju. I don’t welcome them, they can go to anyone else to get trained. Some see it as a way to earn money on the side. In some cases, students want an edge over their friends,” says Shiva, who trains men for free.

Jayadhir Tirumala Rao, a writer and academic from Telangana working on subaltern and tribal art forms, said Bonalu has been elevated as the state’s traditional festival, especially after bifurcation of Andhra Pradesh. “For the youth, it has become a chance of earning recognition in their communities. So they’re getting drawn towards it. Similar scenarios are there in villages too,” Rao said.

No shame, it’s just a ritual

Potharaju is considered to be the brother of seven sister goddesses — different forms of the goddess ‘Mahankali.’ Among the different versions of this Nizam-era festival’s origin, the most believed theory dates back to 1813 when plague hit the twin cities of Hyderabad and Secunderabad and claimed several lives.

Legend has it that a military battalion deployed in Ujjain, Madhya Pradesh, prayed to Goddess Mahankali and vowed to offer her a meal and build a temple if the plague menace was tackled. Once the plague was over, the promises were kept.

The festival, which is celebrated in phases, starts from a tiny temple on the hill top of the city’s Golconda Fort — built during Qutb Shahi Dynasty. Women carry ‘bonam’ — loosely translated as a meal—on their heads. It’s a pot of rice cooked in milk and jaggery, which is offered to the deity.  The entire procession of women walking to the temple is led by the Potharaju who violently dances to loud drum beats and dancing crowds who get whipped by him with his ropes.

Apart from the physical preparation, on the day of the festival, Potharajus cannot consume alcohol, must fast, and cut off their nails to look neat.

While some youth are happy to bare their painted torsos and show off their muscles during the procession, others are reticent.

Twenty-four-year-old Nikhil, who became a Potharaju two years ago, refused to take off his clothes earlier. “Initially there is some hesitation at just wearing shorts and walking in front of hundreds of people. Your neighbours, friends, all of them will be watching you — it is a bit embarrassing. So, that was my feeling too, initially. But when I really understood the meaning behind this avatar and the significance of it, I realised wearing shorts and all is insignificant, because becoming a Potharaju is a matter of honour,” Nikhil said.

The embarrassment happens because people have failed to understand the significance of the avatar, says Shiva  “And so they feel shy to wear shorts and walk on the streets. They claim their friends, especially their female friends, are laughing at them. But all of this does not matter. It is all about the deity, the belief in the tradition. That’s all that should be in one’s head,” Shiva said.

While the Bonalu festival largely concludes today, Potharjus will continue to appear on the streets in small pockets of Telangana over the next few days, leading the procession to temples, warding off negative energy with their dance and fierce gaze. Potharjus like Sagar will wash off their make-up, set aside their whips and sit down to count the money. #tohyd #hydnews

One thought on “‍‍What Telangana’s ‘Bonalu Festival’ Means To Youth?”

A Look Into ‘Unique Professions’ Of India